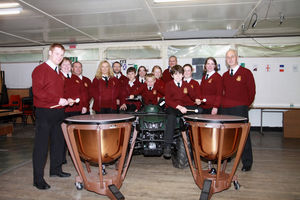 As Tenbury Town Band approaches its 30th anniversary in 2013 one of the main priorities are to replace many of the instruments which have been with the band for a good many of the 30 years.

One of the Instruments which have been on the wish list for a number of years are the Timpani drums. These cost many thousand pounds to buy new and have always been too much for the Band to fund.
Thanks to Nomark Equip which is Run by Band President Mark Yarnold and his wife Anne this has now been possible..
Yamaha are one of the world’s leading manufacturers of Musical instruments and although the Yamaha Motor Company and Yamaha Music are two separate companies clearly the Yamaha name forms a relationship.
Thanks to the generosity of Yamaha Motor UK who supply Nomark Equip with their quad bikes they managed to secure a deal with Yamaha Music to supply the Band the two new Timpani Drums at a very reduced rate and then on top of that generously donated through Nomark a further amount of £1500.
Not only has this allowed the Band to buy two new Timpani drums but has meant that a far more professional set could be afforded.
The Timps made their debut at this year’s Annual concert held at the High School on 12th May and sounded fabulous.
For more details about Tenbury Town Band click www.tenburytownband.co.uk